The Age of Digital Interdependence is now” , the UN claims in its new report 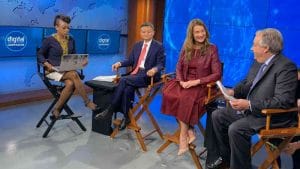 Last Monday, the UN High-Level Panel on Digital Cooperation released a tech report urging multilateral governments, private sector stakeholders, and citizens to collaborate on addressing our world’s digital economic issues. Titled “The Age of Digital Interdependence, the document’s launch comes one year after Secretary-General Antonio Guterres set up the UN Panel to advance proposals that would strengthen cooperation in the digital space. The launch of the report was marked with a live Web chat, featuring Guterres, Alibaba Executive Chairman Jack Ma, and Melinda Gates, co-Chair of the Bill & Melinda Gates Foundation. The report explores three key priorities- the role of technology in achieving the Sustainable Development Goals (SDG); human rights and security online and improving multilateral forums for digital cooperation.

Until relatively recently, the digital economic development was not a strongly addressed area of importance in achieving the SDGs. When the technological revolution saw the meteoric rise of e-commerce, financial technology, and online interactions, the ultimate complications made this difficult to ignore. Last week’s panel report supports the notion that the implications and potential of digital technology strongly connect with all the SDG’s 17 goals and 169 targets. At a time when around half the world’s population still has no access to the Internet, the panel calls for every adult to have affordable access to digital networks, as well as digitally-enabled financial and health services, by 2030. The SDG topics cover issues from ending extreme poverty, to promoting inclusive economic growth and decent work for women and marginalized group. In the Webchat that took place during the report’s release, Panel member Jack Ma gave strong credit to women, who he said made up 50 percent of the most effective sellers in his 10 million-member business selling platform. Hence, by not tapping into all SDGs through digital cooperation, Ma claims that global prosperity will always fall short from fulfilling its potential.

The report also recommends the Secretary-General to conduct a global review of how human rights norms apply to digital technology and calls on social media companies to cooperate fully in responding to such concerns.

Social media has provided powerful new ways to exercise the rights to free expression and association and to document rights violations. Such platforms have also been used to violate rights by spreading lies that incite hatred and provoke violence, often at terrible speed and with anonymity. From the spread of misinformation that led to Brexit to false claims of the dangers of vaccines that contributed to this year’s highest tally of measles in the US since 1992, the call for digital cooperation comes at a sacrosanct moment.  Our current situation puts the younger generation at risk. In Britain for example, suicide rates amongst teenagers have doubled over the past 8 years, with social media playing a significant role. To promote further progress, the UN points to examples of recent measures used to protect human rights and online security. India’s Supreme Court has issued a judgment defining what the right to privacy means in the digital context while Nigeria’s draft Digital Rights and Freedom Bill tries to apply international human rights law to national digital realities.

To achieve digital cooperation and enforce the report’s guidelines, the UN High-Level Panel on Digital Cooperation has called for the improvement of multilateral forums at the global scale. Only recently have forums such as the G20 started regularly to address the digital economy. At the moment, the Intergovernmental Forum (IGF) is the main global space assembled by the UN for addressing internet governance and digital policy issues. Created by the UN World Summit in 2005 as a multi-stakeholder discussion platform, the IGF has become instrumental in clarifying and addressing factual issues in the digital world. The newly proposed forum, the IGF Plus concept, would provide additional multi-stakeholder and multilateral legitimacy by being open to all stakeholders and by being institutionally anchored in the UN system. IGF Plus could help to bridge the existing gap between discussion and decision, to interconnect these intergovernmental negotiations and to open doors for non-state actors to participate in a more adequate way than previously.

The UN Panel has set the date of October 24, 2020, the 75th anniversary of the founding of the United Nations, to establish the multilateral forums and implement the report’s recommendations. In the year between the establishment of the UN High-Level Panel on Digital Cooperation and its report release, stakeholders had already been increasingly involved in implementing policies to protect their digital economies. Malaysia and Singapore have both passed domestic bills against spreading Fake News while G20 ministers gathered in Japan to discuss cooperation to improve the global digital economy. While the panel suggests that the process to enforce the report could be inspired by the ‘World We Want’ process that helped formulate the SDGs, only time can tell what the long term impact will be.

Tourism in a COVID-19 World

Photo credit:  Bangkok Post By Jeff Paine   Thailand to issue long stay visas to rebuild the battered tourism industry.  Tourism destinations around the world have been battered by the COVID-19 pandemic.  With borders shut, flights grounded and general fear in communities, international travel has grounded to a halt.  With many nations in Asia heavily […]

Assessing the EU-Vietnam Free Trade Agreement By Ana Maria Pedraza Serrano | June 10 2020, 8:51 PM SGT    Europe has been emphatic on the importance of the ASEAN region for its trade policy and approached this will through bilateral discussions on Free Trade Agreements with the region’s major economies such as Singapore, Malaysia, Vietnam, […]

Malaysia’s Political Standoff – What Now? By Edika Amin | June 2 2020, 12:40 AM SGT    On 29 February, The King appointed Bersatu President, Muhyiddin Yassin as the new Prime Minister of Malaysia. This came as a shock to many as at that time we all thought he was in support of the Party’s […]