Photo by Vlad Hilitanu on unsplash

Developing countries have increased their global market share of traditional and modern services including finance and telecommunications. That is good news as studies suggest that expanding modern services helps developing countries escape the middle-income trap. The correlation between services growth and per capita GDP growth is higher (0.60) than that between manufacturing growth and per capita GDP growth (0.24).

Continuing advances in information and communication technologies including digital platforms, big data, artificial intelligence and distributed ledger technology have been instrumental in improving the productivity and tradability of services. Digital technologies facilitate competition by lowering entry costs for new firms and enhance productivity by reducing transactional costs and information asymmetries.

Services trade may well drive future growth in ASEAN. So far, ASEAN’s growth strategy has focused primarily on the export of goods. But ASEAN has strengths in services as well. ASEAN economies are more open to services trade than the global average; the exceptions are Laos and Indonesia (Exhibit 1). If ASEAN were a country, in 2019, it would have been the third-largest exporter of commercial services, after the United States and the United Kingdom. China – typically considered as a goods exporter – was sixth. Singapore ranked ninth. Other large ASEAN economies, including Malaysia, Indonesia, Philippines, Thailand and Vietnam, were in the top 50 of world exporters. Many ASEAN countries are also among the top 50 exporters of modern services. 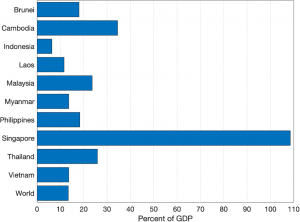 What are ASEAN’s export strengths? An index that shows the importance of a service in a country’s exports relative to global exports reveals ASEAN’s comparative advantage. A value greater than one shows strength (Exhibit 2). Travel services, which account for over a quarter of ASEAN’s total trade with the world, are the region’s strength. Country strengths are diverse. Some, such as Malaysia, Vietnam, and Myanmar are strong in manufacturing services, while Singapore and the Philippines specialize in modern services. However, Singapore shows the most diversity as maintenance & repair and transport are also export strengths.

Historic colonial ties are now less important. France is no longer among the top five partners for Cambodia, Laos, or Vietnam. Neither is the United Kingdom for Singapore. Instead, ASEAN’s most important partners for services trade are Singapore, China, Japan, and the United States. 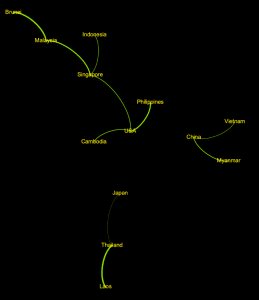 Intra-ASEAN and ASEAN-China services integration continue to intensify. The former supports the goals of the ASEAN Agreement on Trade in Services signed in October 2020. The latter, further strengthens and complements ASEAN’s existing trade and investment ties with the growth engine of the world. Six of nine ASEAN countries have become more integrated with Singapore, relative to Japan, the United States or the world. Except for Myanmar, between 2005 and 2019, the CAGR (compound annual growth rate) of total services trade of every ASEAN country with China exceeded that of trade with either Japan, the United States, or the world (Exhibit 4). While the United States was ASEAN’s largest services trade partner in 2019, at prevailing growth rates, China will assume that position by 2027-28 – about a year before China’s expected ascension as the world’s largest economy.

While these trends are unlikely to reverse, three uncertainties may slow their pace. Firstly, the economic fallout from the present tensions in Myanmar. Secondly, the rebound in cross-border services trade remains subdued due to the Covid-19 pandemic. Contact intensive services such as transportation and tourism, both of which are ASEAN’s strengths, may not return to the norm for several years. Lastly, the zero-sum mindset of the United States in its ‘competition’ with China and the associated economic restraints are likely to cause more uncertainty in ASEAN than in any other region in the world. ASEAN is open to trade and investment from all countries and that is more critical now; so it can continue to be integrated in global supply chains and its markets can continue to be served by domestic as well as foreign companies, regardless of country of origin. Trade is a positive-sum game.

By Somang Yang | August 2, 2022 Photo by Joongil Lee on unsplash Since the Yoon Seok-yeol administration took office with a deregulatory zeal, the fate of various legislative efforts to regulate the power of online platforms look doomed. The “Online Platform Fairness Act” was promoted by the ruling Democratic Party of Korea during the Moon […]

By Nga Dao | June 14, 2022, 2.00pm Photo by Samson on unsplash Vietnam’s Deputy Prime Minister Pham Binh Minh has signed off Decision 667/QD-TTg approving the Strategy for foreign investment cooperation in the 2021-2030 period. The Strategy was issued following Resolution 50-NQ/TW of the Politburo (the highest body of the Communist Party of Vietnam) […]

By Mark Chan | June 5, 2022, 2.00pm SGT Photo by Adrian Schwarz on unsplash First proposed by U.S. President Joe Biden at the East Asia Summit in October 2021, the Indo-Pacific Economic Framework for Prosperity (IPEF) has garnered significant attention following its launch in May 2022. It is widely seen as an attempt at […]