How Digital Currencies Can Improve Financial Inclusion in Southeast Asia

A Primer to Digital Currencies

Southeast Asia is at the forefront of innovation in several major payment technologies. One of the most significant of these is retail central bank digital currencies (CBDCs).[1] At first glance, this development may seem mundane; consumers and businesses have been able to transact electronically, via cards and mobile phones for many years. However, this novel innovation in payments and financial technology is fundamentally very different from existing payments-enabled apps developed by technology platforms or commercial banks.

How a retail CBDC would differ from other payment instruments

Monetary value digitally transferred through the latter formats rely on account-based verification typically coordinated by a centralised platform. Both receiver and sender have to be connected to the same network in order to electronically transact. What is being transferred in these existing digital payment methods, is not ‘money’, but rather an exchange of claims between accounts within the ledgers of bank or payment platforms.   In contrast, retail CBDCs would function as close as possible to coins and banknotes – electronic forms of sovereign-backed fiat which permit holders direct access to liabilities on the balance sheet of a country’s central bank – and theoretically possess universal acceptance as legal tender.

As digital analogues to physical cash, retail-based CBDCs could have significant potential in expanding financial inclusion, by serving as a gateway for unbanked and underbanked individuals to have greater access to electronic payment systems and, potentially, to more sophisticated financial products and services.

Overall, access to formal banking and financial services still remains a pressing policy challenge in Southeast Asia.  The triennial World Bank Findex surveys indicates that global financial inclusion has greatly expanded between 2011 to 2017. However, it is estimated that 1.7 billion people still remain unbanked or underbanked. Out of this figure, nearly 40% come from developing countries in Southeast Asia and India. Being unbanked or financially underserved implicitly stymies economic growth as individuals and businesses are unable to transact, borrow, save or invest in an affordable, safe and secure format. The COVID-19 pandemic has further exacerbated financial access challenges as social distancing protocols and movement restrictions have crippled the traditional business models of brick-and-mortar financial services. 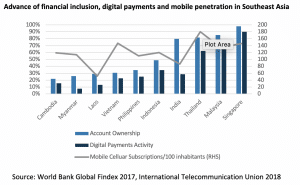 While improved smartphone penetration and access to mobile internet has laid the foundations for a vibrant digital payments ecosystem, there are still significant gaps in retail payments infrastructures, especially among Southeast Asia’s emerging market economies. Physical cash is still prevalent as a preferred medium for daily economic transactions, and not all forms of existing digital payment instruments are ideal substitutes for physical cash payments. 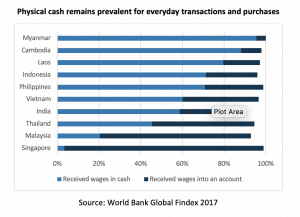 The bulk of everyday purchases in low-income communities consist of frequent low value transactions occurring at high volumes. Expanding the scope of financial inclusion to those at the fringes of the formal financial system will require further improvements to existing digital payment infrastructures.

First, while digital payments routed through modern interbank systems such as Singapore’s FAST, Thailand’s PromptPay or Malaysia’s DuitNow have greatly lowered transaction costs and settlement speed for retail users, these systems implicitly require individuals to already have prior access to a bank account. As the Global Findex data illustrates, the expense of opening and maintaining accounts in formal financial institutions is the most prohibitive factor in Southeast Asia discouraging financial inclusion. Retail CBDCs could thus provide a more affordable alternative to access digital payments channel and push for lower industry costs from private payment providers such as financial institutions and banks. 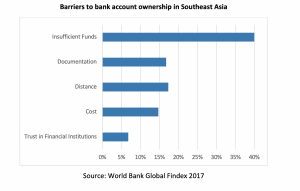 Although mobile money offered by different e-wallet platforms such as Grab, Gojek, AliPay and WeChat Pay have arisen to facilitate payment transactions for individuals without banks accounts, these payment solutions also have intrinsic limitations, and potential risks.

Using mobile money on a regular basis for everyday peer-to-peer transactions requires a pre-existing network to be in place. While agent-based mobile money schemes such as Kenya’s M-PESA have scaled rapidly over time, convertibility to cash, universal acceptance and payments interoperability is not completely guaranteed. Moreover, like commercial bank reserves, the true value of private mobile money accounts is dependent on the solvency of the institutions operating these payment platforms.

Integrating national digital fiat with private payment systems can help ensure that different payment infrastructures are seamlessly interoperable and competitive for their users. China’s DCEP, which is currently being trialled in several Chinese cities, plans to be interoperable across China’s ecosystem of major payment providers dominated by Alipay and WeChat Pay. This may potentially reduce monopolistic trends where SMEs are compelled to exclusively choose between one of the two platforms to process their financial transactions. Likewise, the introduction of too many payment entities and intermediaries can result in industry fragmentation, further adding costs and complexities to inter-platform transactions.

Given the above constraints with existing e-money systems, the development of retail CBDCs accessible to the general public could be a powerful tool to drive greater financial inclusion and permit seamless interoperability between different payment rails. The most advanced example of such a system is China’s DCEP, or digital RMB project, which is currently being trialled in several Chinese cities.

Closely following behind China’s notable foray into the field, several Southeast Asian central banks are in the midst of exploring how CBDCs can complement other digital financial innovations to expand financial inclusion and improve the resilience of payment infrastructures.

Since 2016, the National Bank of Cambodia has researched Project Bakong, a DLT-based digital payment system backed by NBC reserves. Built upon the Hyperledger Iroha blockchain, Bakong eliminates transaction costs between payment platforms by acting as the backbone for the national retail payments and settlements infrastructure. Through Bakong, transfer charges between are eliminated, and settlement accounts at the NBC enable near instantaneous transaction capability in Cambodian riels and US dollars. The Bakong system was formally launched in full capacity in October 2020, and is expected to be a key backbone for enabling interoperability for instant mobile payments using QR codes and phone numbers.

Other than Cambodia, central banks from other parts of Southeast Asia and the Asia Pacific region are also considering the merits of a digital currency. In 2018, Bank Indonesia has shared that it would conduct a two-year experiments into the use of a digital rupiah as a means of improving payment system efficiency. The Bank of Thailand has also announced in October 2020 that following its original research into wholesale CBDCs via Project Inthanon in 2018, it would also conduct experiments into retail based CBDCs based on Enterprise Ethereum alongside  a private technology partner, ConsenSys.

Meanwhile, central banks from developed Asia Pacific economies have a slightly different focus in their digital currency research. Both the Monetary Authority of Singapore and the Hong Kong Monetary Authority have conducted research into using wholesale CBDC systems as means for cross-border payments via Project Ubin and Project Lion Rock respectively. As domestic digital currency projects coalesce across the world, the central banks in Asia’s leading financial centres are fostering bilateral collaborations with a range of other partners. Singapore has worked with the Bank of Canada’s Project Jasper, while the HKMA has collaborated with both the Bank of Thailand as well as the People’s Bank of China. Although wholesale CBDCs may have little direct effects in financial inclusion, over the longer term, successfully developing networks of interoperable cross-border payment channels could radically lower the business costs of engaging in regional trade for SMEs.

Although different policy considerations and design choices will inform the creation of digital currencies across different jurisdictions, it is clear that the rollout of sovereign digital fiat will be a long-term trend that will define the payments landscape both domestically and internationally. Whether directly, or through more proximate means, CBDCs will add greater versatility and options to how individuals and businesses will be able to pay, transact and invest.

[1] CBDCs can take the form of a retail digital currency which would be used as a digital substitute to cash by all individuals and businesses or a wholesale format as an interbank settlement asset by permitted institutions in financial and securities transactions.

The Cyber Landscape in the Digital Age of COVID-19

By Quek Xin Wei | May 5, 2021, 1.30PM Photo by Joshua Woroniecki on unsplash The global pandemic has induced a tectonic shift of the global economy towards one which has fully embraced digitalization. In the wake of government-ordered lockdowns which have shuttered brick and mortar businesses and corporate companies alike as well as forced schools […]

By Desarack Teso | April 29, 2021, 1.30PM Photo by Clint Patterson on unsplash The time is ripe for Member States of the Association of Southeast Asian Nations (ASEAN) to take initiative to promote the adoption of cloud computing in the public sector. Just as the current unprecedented time requires more digital innovation, creative policymaking is […]

How COVID-19 has widened the digital divide for women: A perspective from South Asia

By Aarthi Raghavan | April 22, 2021, 10.00AM Photo by Christina on unsplash Technology is increasingly perceived as a source of division, rather than as the great equalizer.[1] This is particularly relevant to the goal of achieving gender equality in the sector, a key priority for many leading technology companies today. According to UNESCO, globally, women and […]