Photo by Carlos Muza on unsplash

Paper bills were first developed and printed en-masse in China during the 11th century, a major evolution complementing commodity-based payment instruments such as copper coins. This legacy still persists via the sovereign fiat banknotes that are used ubiquitously across different economies.

Moving into the 21st century, the monetary and payments landscape appears to be on the precipice of another major shift. Digital payment instruments and infrastructures have accelerated, with the spread of innumerable forms of private e-money, cryptocurrencies, and electronic inter-bank payment systems. As these proliferate, many see that central bank liabilities, traditionally seen as the most stable form of money, will undertake a similar digital transformation.

Already, the results of the third BIS survey on CBDCs indicate that 86% of central banks are in the process of developing or exploring digital forms of sovereign fiat. Among the ongoing projects, one of the most notable technological developments in the monetary and payments landscape this year is undoubtedly the growing prominence and deployment of the People’s Bank of China’s new CBDC, the Digital Currency Electronic Payment (DCEP), otherwise known as the Digital RMB or e-CNY. In development for the past five years. the expanding trials and expected launch of the Digital RMB ahead of the 2022 Beijing Winter Olympics continues China’s historical track record at the forefront of monetary innovation.

Granted, other digital currencies such as the Bahama’s Sand Dollar and Cambodia’s Bakong are already fully launched. However, China’s Digital RMB will mark the first case of a sovereign digital currency being issued by a major global economy. A testament to the growing economic heft of China and its currency was the 2016 decision to include the RMB within the IMF’s SDR basket, joining the US dollar, the euro, the Japanese yen and the British pound sterling. 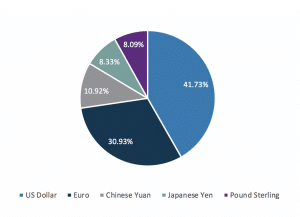 According to SWIFT, compared to the predominant currencies used in international payment activities like the US Dollar (38.43%) and the Euro (37.13%), China’s RMB only has a relatively meager share, standing at approximately 2.20% as of February 2021 (Figure 2). This leaves a considerable runway for growth in the popularization of the RMB as a means of payment and settlement for cross-border trade and international economic activity. 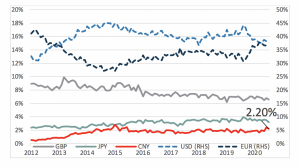 The current thrust of the DCEP pilots is primarily focused on improving China’s retail payments market and developing interoperability between the private financial and technological intermediaries who will distribute the digital currency. However, there are mounting signals that the Digital RMB may eventually translate into wider adoption within the international payments arena.

In January 2021, the PBOC’s Digital Currency Research Institute, CIPS, the Payment & Clearing Association of China established a new joint-venture, ‘Finance Gateway’ with SWIFT, a move that may allow the DCEP to leverage SWIFT’s technology and network for future cross-border growth. Furthermore, in February 2021, the PBOC embarked on a multiple CBDC (m-CBDC) collaboration with the Bank of Thailand, the Hong Kong Monetary Authority and the Central Bank of the United Arab Emirates, alongside the Bank for International Settlements. This project aims to facilitate real-time cross-border foreign exchange payment-versus-payment transactions in a multi-jurisdictional context and on a 24/7 basis.

As China forges closer to a full release of the Digital RMB, it is worth noting that other economies which issue currencies that are part of the SDR basket trail behind in the digital currency race to varying degrees.

Within the Eurozone, the ECB has not publicly taken a decisive stance on whether to issue a digital euro, although it has taken preparatory analysis and conducted public consultations on the matter between October 2020 and January of this year. ECB President Christine Lagarde has recently noted that contingent upon receiving approval from the EU institutions, including the European Parliament and the ECM Governing Council, the ECB could potentially develop a digital euro within the next four years.

The Bank of England has been actively involved in technical CBDC working groups and internal research, with senior officials such as Chief Economist Andy Haldane seeing potential in CBDCs to better deploy unconventional monetary policies such as low-to-negative interest rates.

Japan, China’s neighbour and close trading partner, has taken a more active stance with respect to CBDC development in recent months, likely in response to the accelerating rise of the Digital RMB. Despite conceptually exploring the use of DLT for wholesale financial transactions with the ECB since 2016, the Bank of Japan has previously taken a more cautious approach to CBDC issuance, wary of the implications of bank disintermediation, and a perceived lack of public demand for such a payment instrument. In October 2020, however, the Bank of Japan announced that it would commence domestic experiments for a digital yen in 2021 in order to ‘prepare thoroughly to respond to changes in circumstances in an appropriate manner’.

For many observers, the United States has lagged behind the most prominently in digital currencies and general payments innovation among the existing major currencies used across the world. Despite the acknowledged hegemony of the US dollar as the global reserve currency, institutional progress and regulatory coordination towards modernizing national payments infrastructures such as FedNow, and digital currencies has been haphazard.

In contrast to the relative lack of traction to develop a digital dollar among senior US financial policymakers, as developments such as China’s DCEP and the Diem payment network have evolved, other stakeholders have been advocating the Federal Reserve and the US Treasury for more rapid action in CBDC research. For instance, in January 2020, former CFTC Chairman Christopher Giancarlo launched the Digital Dollar Foundation to advance research on a blockchain-based CBDC for the US dollar. This initiative, however, functions as a private advocacy and lobbyist group rather than an official government CBDC development project.

Signs point towards a gradual receptiveness to CBDCs building within the US public sector. In August 2020, the regional Federal Reserve of Boston embarked on a collaboration with MIT’s Digital Currency Institute titled ‘Project Hamilton’. This initiative is in the midst of exploring the use of existing and new technologies to build and test a hypothetical digital currency platform.Furthermore, in recent months, both Jerome Powell and Janet Yellen have taken a more welcoming public note demonstrating renewed interest in supporting digital dollar research. Nevertheless, the US approach to digital currency issuance is still being heavily tempered with caution and the desire to ‘get it right’. Jerome Powell has summarized this no-rush approach stating: ‘Because we’re the world’s principal reserve currency, we don’t need to rush this project, and we don’t need to be first to market’. The initial findings of the Federal Reserve Bank of Boston’s work with MIT is expected to be released in the second half of 2021, although the full roadmap to a digital dollar will take years to execute.

Is dethroning the dollar a pipedream?

As the proverbial tortoise to the hare embodied by the Digital RMB, it increasingly seems unlikely that a digital dollar will rapidly gain ground against the imminent full release of China’s digital currency. Although the caution of the US Federal Reserve and Treasury may seem to critics as misplaced complacency, dethroning the US dollar is likely to be a long shot for China’s Digital RMB in the short-to-medium term.

As Eswar Prasad has aptly captured, the short-term strategic implications are that China’s digital currency ‘will rise but not rule’.Structural features of China’s financial system such as a restricted capital account and managed exchange rate regime, as well as doubts about the rule of law and investor protections will continue to be hurdles before China’s currency becomes a serious contender to the US dollar and the deep and highly liquid US capital markets.

These constraints aside, the upcoming launch and internationalization of the DCEP may have more significant short-term effects upon payments from a technological standpoint and add to the cumulative US-China technological balkanization that is defining the global economy. As the first major economy to the digital currency table, China is likely to have considerable influence in defining and coordinating common technological standards affecting the future of payments. Already, the PBOC is involved with several cross-border digital currency projects, and has been the first to issue digital currency-related content to the ISO20022 repository, the updated global standard for data exchange in financial transactions.

Figure 3: Controllable anonymity within the DCEP 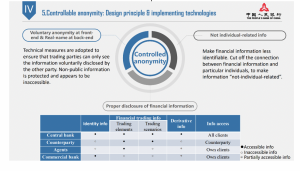 However, certain design features of China’s DCEP, such as the behind the scenes ‘controllable anonymity’ held by the Chinese central bank and government over transactions is unpalatable to many policymakers, business leaders and civil society stakeholders in the United States, who will likely strike a different balance between user anonymity and regulatory accountability in a future digital dollar.

These differences will likely mean that any digital currency competition between China and the US will generate further challenges of technological interoperability in the payments landscape. For now though, compared to China and other major economies, the US appears to be on the backfoot in the sovereign digital currency space technologically, if not financially.

By Somang Yang | August 2, 2022 Photo by Joongil Lee on unsplash Since the Yoon Seok-yeol administration took office with a deregulatory zeal, the fate of various legislative efforts to regulate the power of online platforms look doomed. The “Online Platform Fairness Act” was promoted by the ruling Democratic Party of Korea during the Moon […]

By Nga Dao | June 14, 2022, 2.00pm Photo by Samson on unsplash Vietnam’s Deputy Prime Minister Pham Binh Minh has signed off Decision 667/QD-TTg approving the Strategy for foreign investment cooperation in the 2021-2030 period. The Strategy was issued following Resolution 50-NQ/TW of the Politburo (the highest body of the Communist Party of Vietnam) […]

By Mark Chan | June 5, 2022, 2.00pm SGT Photo by Adrian Schwarz on unsplash First proposed by U.S. President Joe Biden at the East Asia Summit in October 2021, the Indo-Pacific Economic Framework for Prosperity (IPEF) has garnered significant attention following its launch in May 2022. It is widely seen as an attempt at […]